While many business owners and homeowners want to increase their security with a video monitoring security system, few are aware of the risks of the popular wireless security camera kits on the market today. Wireless security cameras might sound enticing but after reviewing the vulnerabilities they bring to your privacy and security you’ll understand why wired cameras are the way to go. Check out these 5 reasons why you’re safer using a wired security system on your property.

Wireless security cameras are particularly vulnerable to hardware attacks because of the way wireless networks operate. Even the top, most expensive wireless cameras available today rely on hardware IDs like MAC addresses and IP Addresses to communicate with the local network and internet.

Specialized and readily-available hardware to circumvent or spoof these identification numbers can be installed to intercept, re-route, or block your camera’s transmissions without detection. Hardwired security installations are much safer because on a wired network, it’s easier to detect device interference and harder to spoof individual devices like cameras. Wired cameras and security systems can also be installed with security alarm monitoring that automatically detects the rare and often deliberate disconnections and other network intrusions which are so par for the course with wireless systems that they often go ignored.

If an intruder wants to breach a camera-based security system, they’d have a much harder time if the system was hardwired in to your network. Wireless security systems can be breached from hundreds of feet away, and the cameras can be disabled before an intruder ever steps foot on your property. These types of premeditated attacks can only be committed against wireless systems since you’d have to be in view of systems with hardwired security installations to disable or interfere with the cameras a devices.

Virtually all wireless security cameras operate on the 2.4 GHz radio frequency. Unlike cameras on a wired network infrastructure, wireless devices are prone to interference from devices like cordless phones, microwaves, drones, and even smartphones and computers. 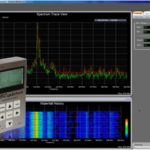 Devices that can analyze RF spectrum are easily purchased online and can discover the frequency and transmission of nearly any wireless camera’s broadcast. These devices can be used to capture video that streams from any wireless camera on your network. Using a wired network infrastructure is the only way to avoid this vulnerability.

Aside from deliberate and incidental security threats to your wireless system, most wireless cameras run on lithium batteries with relatively short life cycles. Alternately, wired security alarm monitoring systems can run power through separate power cords and even Power-Over-Ethernet (POE) in some cases.

There is a clear choice when it comes to protecting your home or business with video and alarm monitoring: Wired security systems. Wireless technologies are not worth the “convenience” of not running a wire to your cameras, which can almost always be discreetly and professionally wired in any environment.

3 thoughts on “Security Cameras: Wireless Can Leave You More Vulnerable”